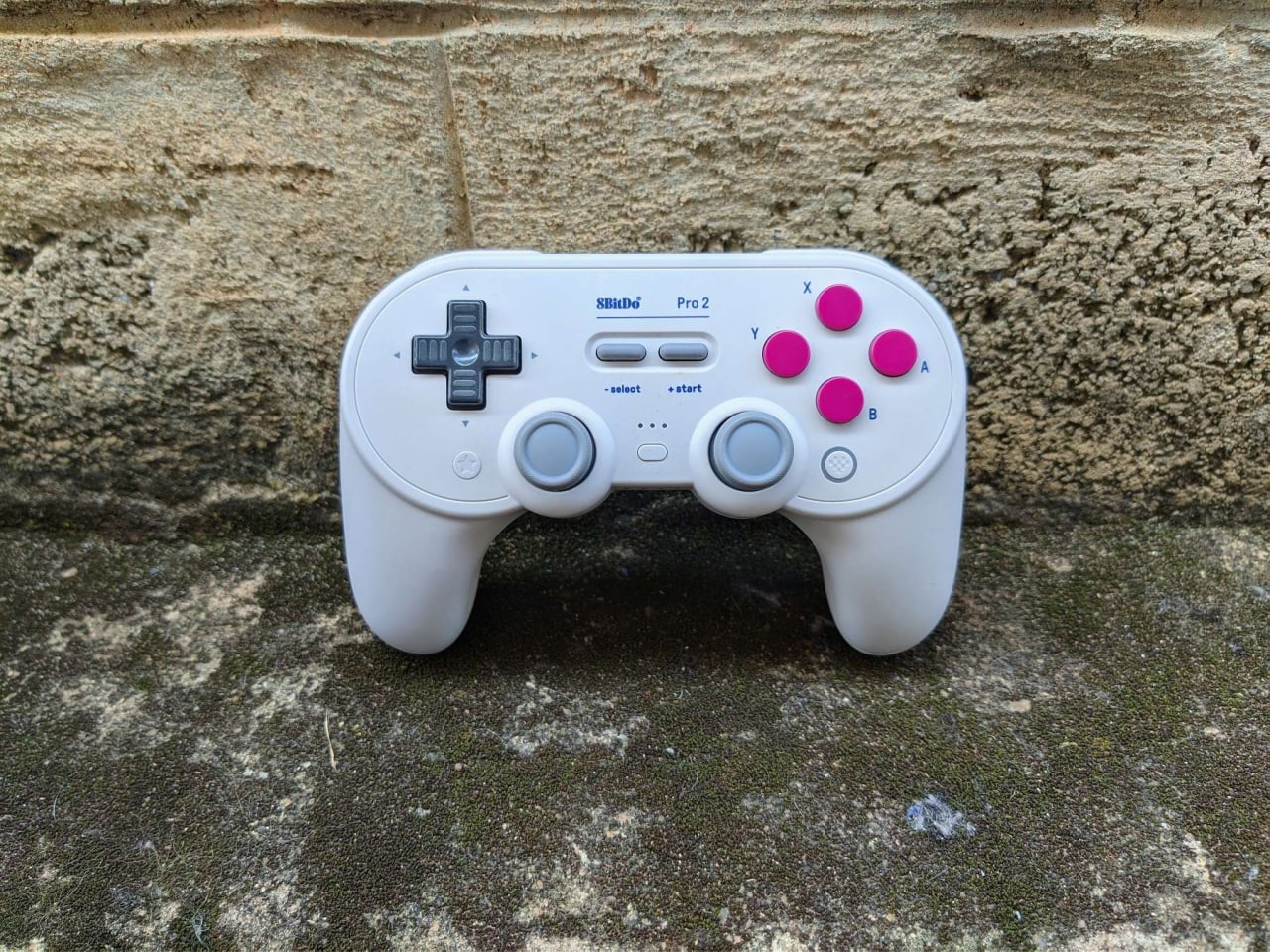 8BitDo is a regular at releasing instantly adorable retro game controllers. It’s not a gimmick though. Controllers such as their latest flagship, the 8BitDo Pro 2, are unquestionably top quality, pack the punch, and offer a plethora of features to appeal to any serious gamer.

For only $49.99 on Amazon, you can get your hands on the 8BitDo Pro 2 which runs on Windows, macOS and Steam, Android and iPhone, Raspberry Pi and the Nintendo Switch. Changing devices is as easy as switching between input modes via a button on the back. All you need to remember is that the S input stands for Switch, A is for Apple (macOS), D is for Android (DirectInput), and X marks the spot for Windows 10 and above.

For a more in-depth look at setting up the 8BitDo Pro 2 controller, please see our tutorial.

To the casual eye, the 8BitDo Pro 2 gives off some serious Game Boy and Super NES controller vibes and that’s by design. It’s actually a mish-mash of the look and feel of various controllers that give it that familiarity you can’t put your finger on. The greyish (or black) face gives way to a textured back to give you a firmer grip. Longer ergonomic handles allow for longer and more comfortable play.

If you’ve followed 8BitDo’s journey, you’ll see a cracking resemblance to the SN30 Pro+, but without the Profile button. The Profile button allows you to switch between different configurations depending on the game you are playing or your preferences.

There are two additional programmable buttons on the back (P1, P2) that come without any designation, but you can still configure them to do… anything. Being new to this, I haven’t found a use for them yet, but I’m sure I’ll find a few in the days and weeks of use to come.

The controller doesn’t stray too far from the norm with its button layout. It favors Nintendo Switch A/B/X/Y layout. Playing games on Android and Windows changes the buttons from AB to BA and XY to YX. You can get used to it pretty quickly like me. But here’s the thing; you do not have to.

8BitDo Ultimate software available for Windows, macOS, Android and iOS lets you customize button mapping, adjust stick and trigger sensitivity, vibration control and create macros with any combination of buttons of your choice. Personally, the first thing I did was change the button layout on Xbox and reduce vibration. The default maximum setting was shaking my bones for no good reason.

The 8BitDo Pro 2 saves up to 3 profiles accessible by simply pressing the profile button. Once you exit the Ultimate Software app, profile changes will take root. From there, you can tell which profile you’re switching to by the white LED light next to the profile button.

Updating firmware is another thing you can do whenever you connect your controller via USB. It’s fast and seamless to the point that it’s almost imperceptible.

Being a jack-of-all-trades, the 8BitDo Pro 2 does a lot, but in doing so, it may not specialize in certain features compared to some competitors.

For example, on the Nintendo Switch, the controller does not have HD Rumble or NFC, and will not wake the console from sleep mode like the Nintendo Switch Pro or Joy-Cons. It does, however, support motion controls. OEM controllers don’t have to appeal to everyone, so they get away with it easily.

If you like mobile games, you can buy a smartphone clip so you don’t have to place it somewhere like a hobbyist while you play your favorite games. Sadly, I haven’t ordered it at the time of writing this review, but that didn’t stop me from having a blast. My only issue with mobile gaming is my smartphone getting hot with the kind of heavy games I like to play.

8BitDo promises up to 20 hours of battery life on a full charge with its 1000mAh battery. Charging time is four hours, but you can top it up here and there with no problem. I have to say that I haven’t put this to the test yet. On PC, I’m more comfortable plugging in the supplied USB-C to Type-A cable.

As far as I know, it doesn’t seem like you can buy replacement batteries from 8BitDo yet. On the plus side, you can replace the battery with two regular AA batteries if needed. Not that it’s something you need to worry about anytime soon. The battery should be good for a few more years.

By all accounts, the 8BitDo Pro 2 is the SN30 Pro+ with a few extra tricks. Who says you can’t teach an old dog new tricks? You have the option to add and switch profiles in a snap, two additional buttons on the back and the input switch for different devices.

As someone who hates clutter, being able to customize my controller means I don’t have to use different controllers when playing different games. The 8BitDo excels in this area.

However, remember when we said earlier that the 8BitDo Pro 2 gave off some serious Game Boy vibes? I would say this controller mimics bits and pieces of other controllers like the PS4, Switch and SNES to be what it is. But even so, he does not lose sight of the mission. In fact, the 8BitDo Pro 2 is still great for SNES and other classic games, but also works quite well as a modern controller with excellent ergonomics.

Now wait for the nostalgia to kick in. Get the 8BitDo Pro 2 game console from Amazon for just $49.99.