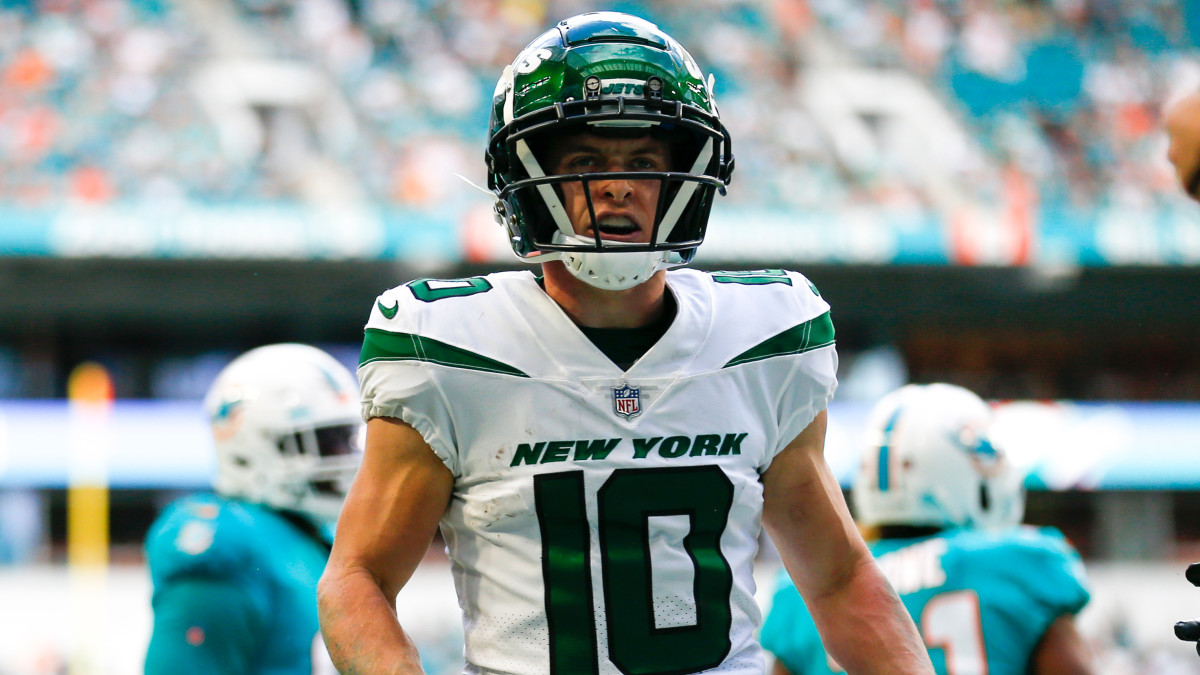 1. Over the years, we’ve periodically been completely mystified by how certain players appear in mad.

Who can forget last year when mad made Patriots quarterback Mac Jones look like this:

In 2018, Tyrone Crawford of the Cowboys was not thrilled with the flabby body that mad he gave him.

Berrios recently dyed his hair blonde, so here’s what he looks like now:

And here’s what Berrios looked like before going platinum:

Egreful is the right word. Why has he mad pretend that Berrios, who is 26, is 46? And why did he mad giving serial killer vibes to Berrios?

Berrios claimed via Instagram that he was convinced Madden had it all.

Berrios’ girlfriend, Sophia Culpo, had a great response to his render:

My first thought when I saw the photo was that the guy looks more like a character from Mad Men than an NFL player.

NFL fans also thought of Berrios mad likeness, with Tobey Maguire and Carmy of the bear get a lot of play.

2. A brand new IS Media Podcast dropped out today and my guest this week is Tim Burke, also known on Twitter as @Bubbaprogone of the old dead spin the reporters who broke the story of the 2013 Manti Te’o girlfriend prank which is the subject of a new two-part series on Netflix.

Burke provides details on how dead spin got the tip on Te’o and how long they worked on the story before releasing it. He also talks about being surprised by the reaction to the story, what he wanted to accomplish with the story, and what he would do differently.

Burke also discusses the recent kerfuffle he got himself into after posting a spliced ​​video of Sean Hannity and Ron DeSantis, how he was the first person to post the uncensored video of Will Smith slapping Chris Rock at the Oscars, how he is able to monitor so many things throughout the day and more.

The podcast concludes with the weekly “Traina Thoughts” segment with Sal Licata, from WFAN and SNY in New York. This week, I continue another streaming rant, with the new NFL+ service as the target. We also discuss the NBA vs. NFL battle now slated for Christmas Day, the NFL’s decision to add a Black Friday game next season, and more.

You can listen to the podcast below or download it at Apple, Spotify and Google.

3. Giants broadcaster Dave Flemming gave partner Jon Miller, who called Sunday night baseball on ESPN for many years, a long lesson on Wordle in the game last night, and it was gripping.

4. The Big Ten’s new media deals were officially announced today. My colleague Pat Forde has all the details, but one development that doesn’t bother us at all is that it looks like CBS, which will now air Big Ten games instead of SEC games, will keep the same theme music. I’m sorry, but a new conference should mean new music for CBS.

5. I saw Shohei Ohtani go 4-for-5 with four RBIs, two runs scored and a homer on Wednesday. I also saw the Mariners beat the Angels, 11-7. So it’s a good day to bring back one of the best sports tweets of the past year.

7. RANDOM VIDEO OF THE DAY: The rock recently shared the backstory on this infamous promo where he poked fun at HHH during an Instagram Live with the former WWE Editor-in-Chief (and last week IS Media Podcast guest) Brian Gewirtz. Still worth a watch.

Make sure you catch up on previous editions of Traina Thoughts and check out the Sports Illustrated Media Podcast hosted by Jimmy Traina on Apple, Spotify Where Google. You can also follow Jimmy on Twitter, instagram and ICT Tac.

This community video game is real, and it’s amazing