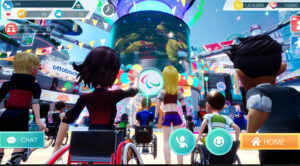 The very first official video game of the Paralympic Games ‘The Pegasus Dream Tour’, created by JP Games, syncs with the real-world event to allow players to experience all the excitement of the games via an online multiplayer community – all on a mobile phone.

As participation in this year’s Paralympic Games in person is not possible, the game gives Paralympic Games fans the opportunity to come together in the virtual setting of Pegasus City, watch highlights from real games and participate in their own competitive Grand Prix Parasports tournament. . In accordance with the start of the Paralympic Games the ‘Grand Prix Pegasus Parasports’, the biggest official tournament, will take place from tomorrow (25 Auguste) to Sunday September 5e.

Players will be able to take part in competitive virtual parasport matches across 5 events: boccia, 100m sprint, wheelchair basketball, wheelchair racing and 5-a-side football. Those who hope to win gold will have their own chance for glory with in-game medals awarded based on total points earned during the competition.

Daily highlights of the heated competition in Tokyo will also be shown on the main screen located in central Pegasus City every day during the Paralympic Games. Highlights will be updated daily starting Wednesday 25e August. Player avatars or “Mines” can express themselves and show their support through stamps and emotes while watching hotly contested events.

Much like the actual Paralympic Games at the end of the games, visitors to Pegasus City will also be able to enjoy a spectacular Parasport Grand Prix Closing Ceremony. RPG avatars of Japanese stars Virtual DREAMS COME TRUE will perform a free virtual concert in the game “Let’s Evolve!” A total of 9 true Paralympic athlete avatars, such as boccia player Hirose Takayuki, wheelchair basketball player Patrick Anderson, javelin thrower Holly Robinson and 5-a-side footballer Silvio Velo, will also appear at the ceremony in their avatar form.