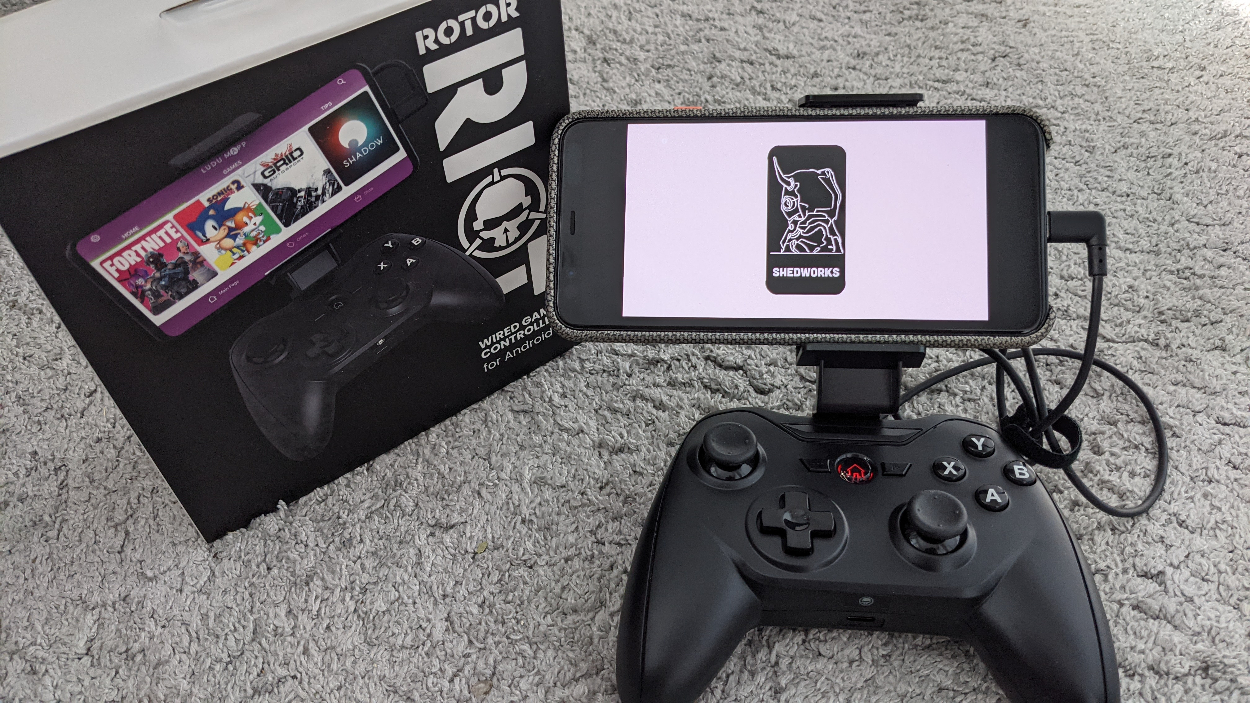 It took them almost two years, but the Rotor Riot team were finally able to ship their Rotor Riot wired game controller in a form outside of iOS, with its latest model now fully playable for those in the Android military. The point is, two years is a long time and while Rotor Riot was one of the first on the scene to create a decent little accessory for mobile gamers – and those of us plying our trade on Xbox Game Pass. and via Project xCloud – now there is a huge amount of competition in the market. Does this product have what it takes to compete?

With Razer’s awesome Kishi for Android, with GAMESIR and their X2 in Bluetooth and USB-C form and with Nacon hits the market with its brilliant MG-X controller, times have never been so difficult for the Rotor Riot team to make an impression. And as we know, it’s the first impressions that really matter. With that in mind, a bit of disappointment strikes here.

The Rotor Riot Wired Game Controller for Android is an all-black kit, designed in the same way as the standard Xbox controller. It’s obviously an immediate victory, but getting your hands on this device for the first time, it feels a bit too plastic to the touch. With few textured surfaces, this rough plastic piece fails to really excite. Granted, it’s cheaper than most of the competition, but I live by the currency the more you spend, the better product quality you will get. It certainly seems to be the case here.

But let that slide for a moment and you’ll find the Rotor Riot wired game controller belies that initial feel. It is well designed, fits perfectly in the hand, and comes with a few chopsticks which are an absolute pleasure to use. With a little crushing on the concave designs of these sticks, your thumbs will grip them like there’s no tomorrow, as they rarely give off any form of slippage. They are an absolute joy to stroke and use in your gaming moments.

The same cannot be said of the D-Pad. Again, this feels cheap to the touch, clunky, bulky, and rarely allows the precision you need. It looks cheap too and is not a better way to play. Fortunately, apart from the likes of Boulder Dash Deluxe where the D-Pad really comes into its own, it’s the controllers that will be the primary focus for many Xbox gamers – especially those who use the Rotor Riot for Xbox Game Pass and cloud games.

Back to the positives though, and the standard ABXY face buttons look quite nice, although it would be better to inject some color into them. Black with a white / gray font, there is absolutely no problem finding and pressing any button you want no matter how manic things can get. The bumpers and triggers are both decent to use as well and while these still feel a bit cheap compared to the competition, they absolutely do the job intended for them, allowing for a good flow of indexes. between the two options.

As a non-Xbox product – and remember, the Rotor Riot is compatible with a plethora of Android games, not just those through our beloved Xbox Game Pass – the home button and menu / start options are covered by Rotor Riot’s own unique sockets. Again, they are easy to push in and cover exactly what is required of this type of button.

Next, we touch on what makes the Rotor Riot really stand out as an option to consider for gamers using an Android device – the connected phone cradle and the built-in USB-C cable.

The latter comes out at the back of the controller, with a short wire allowing connection to your Android phone. Now, this is a USB-C cable, so you’ll need to make sure that your phone is covered in this regard (although the vast majority of newer phones will) and that when connected it powers the Rotor Riot controller. Connection is immediate, an absolute snap to engage, and lets you scroll through your phone making the most of those brilliant analog sticks, all lag-free. The cable isn’t particularly long (around 65cm long when untangled) so it rarely gets in the way of what you are doing.

With a USB-C port on the front of the controller as well, even if your phone’s battery is low, the ability to charge through the Rotor Riot with a power pass is appreciated.

And so, this holder. Screwing in place with a little grub screw type thing, once attached to your controller it doesn’t go anywhere in a hurry. Firm, sturdy, and happy to hold your phone securely, the accompanying sliding mechanism will be able to support a decent amount of devices. We tested both a Pixel 4 and the XL version and found it able to hold both phones with ease. The mechanics behind the slider hold the device well too, and with both a textured back and handles, should never cause any damage.

The point is that this support is not adjustable in any way. Rotor Riot obviously saw fit to make sure it holds your phone in a fairly decent position, but it would have been extremely appreciated if it could move around from a few angles. It’s not a big deal most of the time, but there are some moves that are sometimes preferable, especially when you decide to take long sessions.

Overall, Rotor Riot knows what you need from an easy-to-use product, and you shouldn’t be put off by the cheap feel of the Rotor Riot wired game controller. It comes with a pretty decent price, is perfect in terms of connecting to your Android device, and comes with some great analog sticks. Yes, that plastic vibe comes to the fore a little too often, but overall it does the job required – letting you play on Android, Xbox Game Pass, and via the Cloud, lag-free, hassle-free, and hassle-free.

Many thanks to the Rotor Riot team for providing us with the Android version of their wired game controller. You can get one by visiting Amazon.

And do not forget, if you are an iOS gamer, Rotor Riot also supports you.