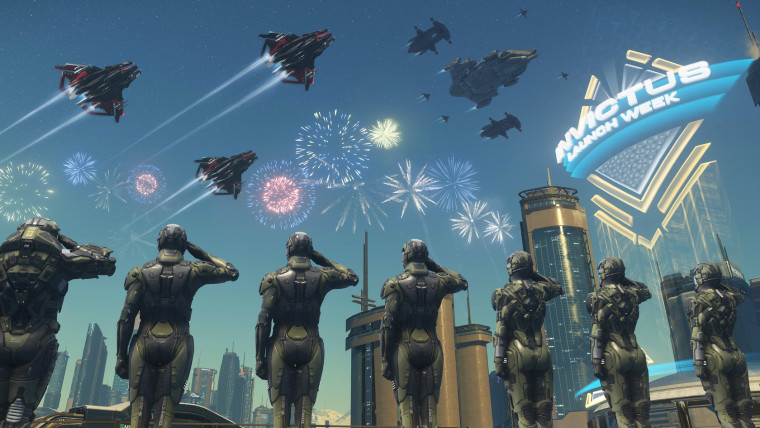 The annual Star Citizen Invictus Launch Week event was launched by Cloud Imperium Games. Being the biggest free promotion the studio hosts each year for the crowd-funded game, it offers full access to the project for the next 11 days, with its doors set to close on May 31.

Unlike the studio’s regular free events, this Free Fly offers nearly every ship and vehicle in the game for everyone to try out as part of an in-universe showcase. Every 48 hours, a different manufacturer will come to the convention hall with their wares, offering everything from capital ships and alien starships to ground vehicles for testing.

The showcase takes place at a specific point on the planet Crusader. Cloud Imperium Games even offered new players instructions to follow to make sure they get to the storefront on time and in one piece:

First, you need to head to Planet Crusader. If this is your first visit to the Stanton system, you can directly spawn in the Greencircle Habitation building. If you are already a Citizen of the Verse, jump to Crusader, jump to Orison, then land at August Dunlow Spaceport. From there, take the shuttle system through the Vision Center pick-up area.

There is also a Javelin destroyer, the UEES War Hammer, available for tours. The juggernaut ship will move to several locations in the Stanton system as the event progresses, so players will need to find its location on information boards.

To join the star citizen Invictus Launch Week Free Fly create an account and download the game here. Find more details regarding the event on its FAQ page here. The developing title recently crossed the $450 million mark raised solely through crowdfunding. Its most recent major update provided rivers to planets, selling loot to players, ship-to-ship resupply in space, and more.