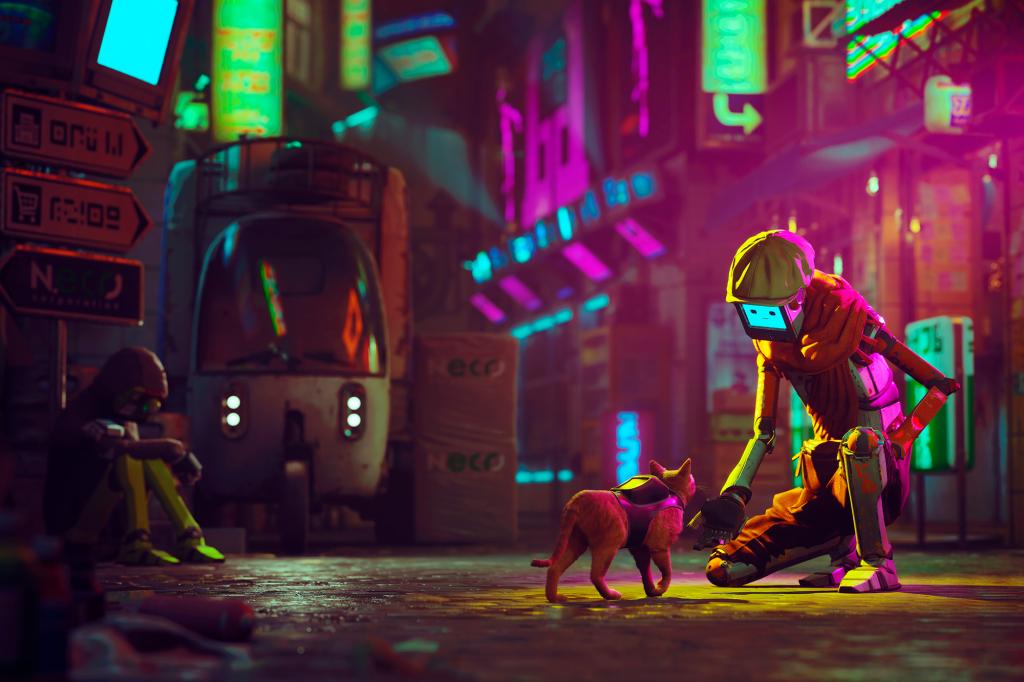 Through online fundraising platforms, players play “Stray” while broadcasting live for the public to raise money for animal shelters and other cat-related charities. Annapurna Interactive, the game’s publisher, also promoted “Stray” by giving two cat rescue and adoption agencies raffle copies of the game and renting a cat cafe in New York City.

Live-streaming gameplay for charity isn’t new, but the “Stray” resonance quickly found among cat lovers is unusual. It was the fourth most-watched and streamed game the day it launched on Twitch, the streaming platform said.

About 80% of the game’s development team are “cat owners and cat lovers” and a real stray orange cat and their own cats inspired the game, a creator said.

“I certainly hope some people may be inspired to help the real strays in real life – knowing that having a pet and a companion is a responsibility,” said game studio producer Swann Martin-Raget. BlueTwelve in Montpellier, in the south of France. .

When Annapurna Interactive reached out to the Nebraska Humane Society to partner up ahead of the game’s July 19 launch, they jumped at the chance, marketer Brendan Gepson said.

“The whole game and the whole culture around the game, it’s all about the love of cats,” Gepson said. “It fit very well with the shelter and our mission.”

The shelter got four copies of the game to give away and asked for $5 donations to enter a raffle to win one. Within a week, they raised $7,000, Gepson said, with the vast majority of the 550 donors new to them, including people donating from Germany and Malta. The company also donated $1,035 to the shelter.

“It was really mutually beneficial,” Gepson said. “They got great PR out of it and we got a whole new donor base out of it.”

Annapurna also bought Meow Parlor, New York’s cat cafe and adoption agency, for a weekend, along with a $1,000 donation. Visitors who had booked could buy “Stray” themed products and play the game for 20 minutes surrounded by cats. (The game also captivates cats, videos on social media.)

Jeff Legaspi, Marketing Director of Annapurna Interactive, said it made sense that the game’s launch would do something “of positive impact and hopefully create more awareness for adoption and not purchase of a new pet.

Annapurna declined to disclose sales or download figures for the game, which is available on PlayStation and the Steam platform. However, according to Steam Monitor SteamDB, “Stray” was the No. 1 game purchased since two weeks.

North Shore Animal League America, which rescues tens of thousands of animals each year, said it has seen no increase in traffic from the game, but has received more $800 thanks to a player.

By a happy coincidence, the shelter had just created a profile on the Tiltify platform, which allows charities to receive donations from video streams, the week the game launched. The player funneled the donations to the shelter, breaking her initial goal of $200.

“We see Tiltify and live streaming as a whole new way for us to engage a whole new audience,” said Carol Marchesano, Senior Director of Digital Marketing at Rescue. However, organizations usually have to reach out to personalities online to coordinate live streams, which can be a lot of work, she said.

For his part, Nebraska’s Gepson reached out to an Omaha resident who goes by the name of TreyDay1014 online to host a charity livestream. Trey, who asked that his last name not be used, has two cats, one of which he adopted from the shelter.

Last week he told viewers watch live on the Twitch platform as his cat persona kicked another cat’s tail and danced along the railings.

“If I found out my cat was out there doing this, I would be shocked,” Trey said, as his character jumped a perilous distance. Moments later, a rusty pipe broke, sending the tabby into a heartbreaking plunge into darkness.

A $25 donation followed the drop, bringing the amount Trey raised for the Nebraska shelter to over $100 in about 30 minutes. After four and a half hours of play, donations totaled $1,500. His goal was to raise $200.

“It opened my eyes to the possibility of using this platform for more than just playing video games,” Trey said.